On September 20th 2020, Danièle Kapel-Marcovici, President of the RAJA-Danièle Marcovici Foundation and CEO of the RAJA Group, presented, on behalf of RAJA employees subscribing to the microdon, the 2 RAJApeople Prizes 2020 for the amount of € 8033 each to the organizations Femmes pour le Dire, Femmes pour Agir and Movement France for their remarkable actions in favour of the emancipation of girls and women.

Since 2013, the RAJA Group has been offering its employees the opportunity to participate in the microdonation (rounded over salary) to support associations funded by the Foundation. This year, thanks to the solidarity of 154 microdonors, € 16,066 were raised (almost € 2 000 more than in 2019). They have been invited to vote for their 2 favourite associations, one in France and the other internationally, that will receive the RAJApeople Prizes and share the total amount of collected donations.

Danièle Kapel-Marcovici introduced the ceremony by reminding the mainspring of these Awards:

« The RAJApeople Prizes not only bring a financial help to organizations which carry exemplary actions in favour of women, but also to provide more visibility to these project leaders, to give them media coverage, so that their struggles are highlighted and their seriousness is rewarded. » 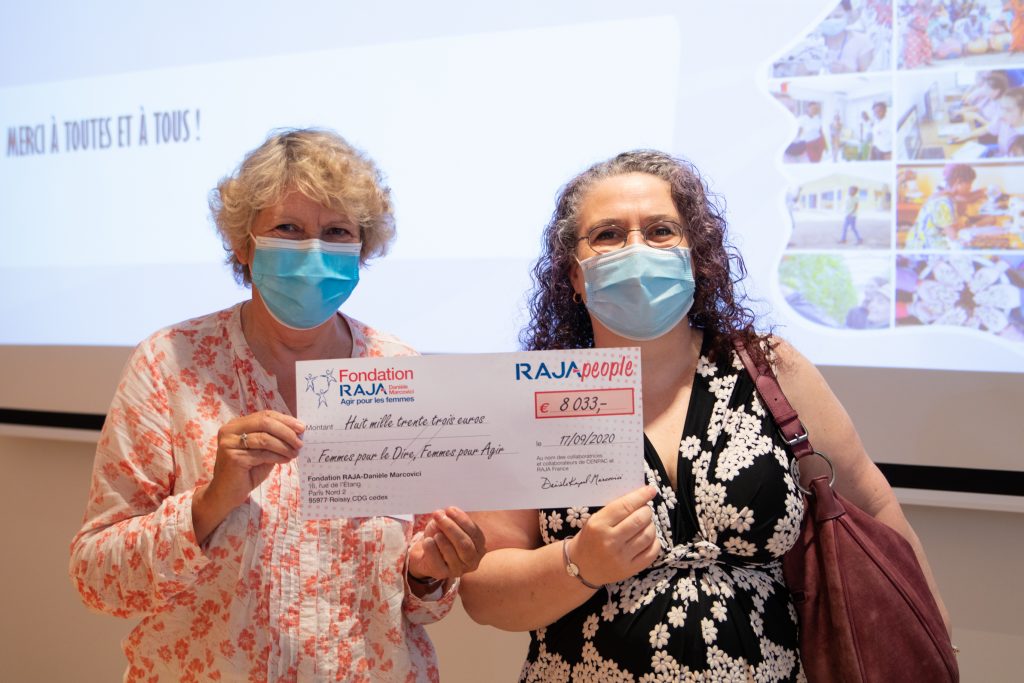 Isabelle Dumont, Communication Officer at FDFA warmly thanked the staff for their support:

“The sanitary crisis was a test on the subject of violence against women. They were more exposed to domestic violence. The number of calls quadrupled during the confinement. This is why your support is more valuable to us than ever. »

THE RAJAPEOPLE INTERNATIONAL AWARD GRANTED TO THE ORGANIZATION MOVEMENT FRANCE 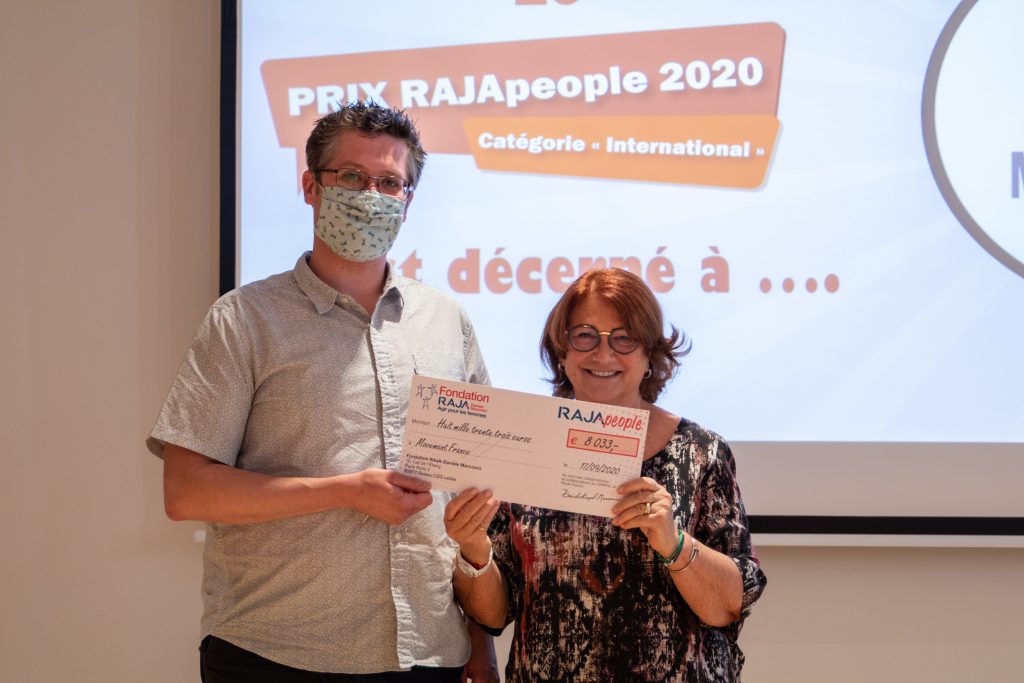 Mathieu Riffault, Secretary of Movement France and Danièle Kapel-Marcovici, President of the Foundation and CEO of RAJA Group.

The International RAJApeople Award was granted to the organization Movement France for its project “Fight against the period taboo and train Burkinabe women in an income-generating activity“. In Burkina Faso, the menstrual taboo hinders the social and professional emancipation of women and girls who are considered impure during this period. Movement France provides a lasting solution through its workshops for the manufacture of washable sanitary towels, made by women in precarious situations; the living and health conditions of women and girls are improved, and their absenteeism rate at school and at work is reduced.

“On behalf of Movement France, I would like to thank the RAJA-Daniele Marcovici Foundation and RAJA donors. This Prize will allow us to strengthen communication about the project and in particular to promote the fight against the period taboo in middle and high schools. ” Mathieu Riffault, secretary of Movement France.

Danièle Kapel-Marcovici closed the ceremony by reminding that the needs of organizations working for greater equality remain substantial, everywhere in the world, and by thanking RAJA’s collaborators for their commitment.

“The Foundation works tirelessly to meet these needs as best as it can. I would therefore like to thank all the micro-donors who generously participated in microDON program this year. Their support is twofold, not only through their donations, but also through their daily work, which allows the Foundation to exist”.

A look back to the RAJApeople 2019 Awards

The 2019 RAJApeople Award enabled the Committee for the Health of Exiles (Comede) to improve the care of women through the development of its dance workshops, aiming to integrate the therapeutic approach of women victims of violence into a reappropriation of their bodies, space and care. In 2019, the dance workshop benefited 19 women who participated in 72 sessions.

Thanks to the 2019 RAJApeople Award, the Triangle Génération Humanitaire (TGH) association has strengthened its actions with girls living on the streets of Bangui (Central African Republic), by offering a new training course in sewing for the 67 young girls living in the centre of Damala. The Award also made it possible to carry out rehabilitation work on the facilities to improve their living conditions.

Find the article on the 2019 laureates by clicking HERE