First held in 2013, the annual Women's Awards pay tribute to associations working in France and elsewhere in the world, running remarkable actions and initiatives which have durably and demonstrably helped to improve women's lives. 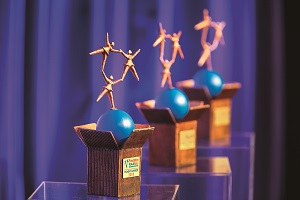 The Fondation RAJA Women’s Awards were launched in 2013 and renewed in 2014 and 2016 (special edition for the Foundation’s 10 years) and in 2018, in order to promote the Foundation’s actions with all its partners, to reward the associations by communicating about their activities and the results achieved. The Women’s Awards are intended to highlight initiatives that have made a real difference in women’s lives and allowed them to assert their rights and achieve greater equality, thus contributing to the Foundation’s impact on the ground.

The 4th Fondation RAJA Women’s Awards Ceremony was held on November 20, 2018 at the Trianon Theatre (Paris) and brought together more than 400 guests.

This evening is a flagship event for the Foundation, since it helps to highlight the essential work carried out by the associations it supports, and which act for the emancipation of women in France in the world.

This ceremony once again made it possible to greet, thank and encourage all these associations to continue their struggles with women. Danièle Kapel-Marcovici Founder and President of the Foundation concluded the ceremony by addressing to all a committed message:

“What great hopes have just given us all these associations and their projects! An example for all of us, a source of inspiration and action! However, we see every day that progress is still too slow, too uneven, and that political will and financial means are lacking everywhere. Numerous rights remain to be conquered and those obtained are regularly called into question. […]

That is why we must continue, on the one hand, to fight all forms of violence and discrimination against women, and on the other hand to implement the solutions that enable women to take charge of their daily lives and their future. While the challenges of advancing the cause of women are still enormous, examples of actions such as those we are rewarding tonight show that progress can be made.

As President of the Foundation, I affirm our commitment to contribute to the achievement of the United Nations Sustainable Development Goals, and in particular to Goal 5, which aims to achieve gender equality and the empowerment of all women and girls by 2030. This ambitious objective requires a strong mobilization of all. The RAJA Group’s commitment to social responsibility is reinforced day by day, in a context where discussions on the role of the company are increasingly putting its corporate social responsibility on the agenda.

I hope that our Foundation will be an example, that it will entice other companies to become involved in philanthropy and patronage actions.”

An extraordinary jury, consisting of current and former members of the Executive Committee of the Foundation, distributed the 12 finalist actions. An overall grant of €80,000 was given to the 6 winning associations to develop their action.

A festive evening under the theme of women here and abroad

For this 2018 edition, the Foundation has also produced a digital exhibition. It showcases 150 inspiring women around the world, divided into two groups:

The women of yesterday and today are prominent female figures for the emancipation of women and the improvement of their living conditions: women “activists” (social, political) or women on inspirational professional or personal trajectories. These portraits were selected by the RAJA employees of the Group’s subsidiaries in 18 European countries and in partnership with the magazine «Femmes Ici et Ailleurs» (Women here and aborad).

The women of tomorrow are women who are building the future: they are beneficiaries of actions supported by the Foundation. These women show exemplary courage every day and contribute to building a more egalitarian society.