On the occasion of the International Women’s Rights Day on March 8 and as part of the RAJApeople programme, the RAJA-Danièle Marcovici Foundation organized a week of mobilization within the RAJA Group.
From March 4 to 8, RAJA France employees were invited to participate in fun, creative or sporting workshops facilitated by associations supported by the Foundation. Solidary collections for the benefit of associations that support women in precarious situations have been organized in France and in all the Group’s European subsidiaries.

A launch event with involved stakeholders 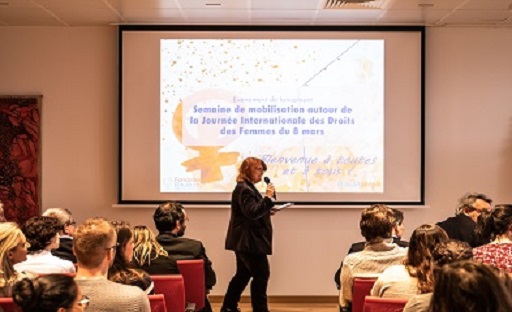 Danièle Kapel-Marcovici, CEO of the RAJA Group and President of the RAJA-Danièle Marcovici Foundation, launched this week of mobilization at an event on March 1st at the RAJA Group headquarters, in the presence of two committed personalities:

Pierre-Yves opened the digital exhibition of women’s portraits created in partnership with the magazine Femmes Ici et Ailleurs on the occasion of the RAJA Women’s Awards Foundation Ceremony 2018. This digital exhibition, which celebrates 150 inspiring women from all over the world, is now located at the RAJA Group headquarters.

–Thomas Charbonnier, Gynecologist-Obstetrician and Administrator of Gynecology Without Borders (GSF)

Thomas explained the difficult conditions in which women in migrant camps in France live. They are victims of rape, prostitution, giving birth or abortions without any medical or psychosocial support. GSF offers these women gynecological monitoring, prevention sessions and shelters for particularly vulnerable women.

Throughout the week, a large collection of hygiene and necessities products is organized at the RAJA Group headquarters at the benefit of Gynecology Without Borders.

Workshops to practice our talents for women’s rights

Around fifteen collaborators took part in the «Sport & Reconstruction» workshop led by Bolewa Sabourin, in music and cheerfulness! Bolewa is the creator of Re-Création by Loba, a project that introduces women who are victims of sexual violence to dance as therapy, so that they can reappropriate their bodies.

Many collaborators participated in the «Cooking & Reinsertion» workshop proposed by the Re-Belle association! Re-Belle is a site of insertion around the manufacture of artisan jams from unsold fruits and vegetables. The project is aimed at an audience who are experiencing difficulties in their socio-occupational integration, and in particular women who are remote from employment.

The Filles du Facteur team moderated a plastic bag weaving shop. About twenty collaborators were able to acquire the basics of crochet and get to know the recycling of plastic bags. The association bears the Recycsacplastic project, whose main objective is to strengthen the autonomy of women in situations of exclusion (disability, isolation, precariousness, illiteracy), in France and in Burkina Faso, by training them to create fashion and home objects from plastic bags.

To end this week of mobilization, Danièle Kapel-Marcovici offered gifts to all female employees of the Group. In France, the collaborators received the comic book of Rumiko Takahashi, elected Grand Prix of the 46th Comics International Festival of Angoulême 2019 (of which RAJA is the main partner). Rumiko Takahashi is the second woman to win this award since the creation of the festival in 1974.

The employees of the European subsidiaries received an eco-responsible gourd, a gift in line with the Group’s commitment to environmental protection.

« Women have their own stories » season 4

Throughout the week, we also aired the portraits of the 4th season of the series «Women have their own stories», 7 short films directed by Marie Drucker, animator known and recognized for her commitment to women. For this new season, this program, funded for the 4th consecutive year by the Foundation and by 7 other Corporate Foundations (Chanel, ELLE, Kering, KPMG, Sanofi, RATP, Unilever), brings to light men who act on a daily basis to advance women’s rights.

> To review Season 4 of “Women have their own stories,” click HERE.