Focus on… girls’ access to education around the world

Each year, the month of September is the occasion to highlight the issue of access to education for all. In this 2019 new school year, we have chosen to recall the obstacles that still hold a very large number of girls away from the school benches, and to present the actions of associations supported by the RAJA-Danièle Marcovici Foundation which struggle to push back these barriers.

Around the world, and especially in developing countries, the weight of traditions, security conditions and child labour expose girls to various forms of gender-based violence, be they sexual, sexist, physical or moral, and have a direct and negative impact on their education.

Today, nearly 200 million girls and women worldwide have undergone some form of female genital mutilation (FGM) according to figures from Unicef (United Nations Children’s Fund). Nearly half of them live in Egypt, Ethiopia and Indonesia. This practice affects 44 million girls aged 14 and under, and in the 30 countries where the number of mutilations is highest, most of the victims suffered such violence before the age of 5. FGM deprives girls of their child’s life and normal schooling. These barriers to education are reinforced by the practice of early and/or forced marriage.

Child marriage remains an authorized practice in 117 countries and territories. Every year, 12 million girls are married before the age of 18. In many countries, and particularly in low-income countries, many girls are removed from school by their families from puberty and married. They are therefore confronted with obstacles that directly affect their schooling: social norms and customs that force them to stay at home to take care of household chores and later children (4 countries in sub-Saharan Africa formally prohibit girls from returning to school after pregnancy), but also physical and moral exhaustion related to the impact of early marriage on health conditions.

In 2015, the United Nations (UN) through its 193-member countries committed to eliminating FGM by 2030, as part of the Sustainable Development Goals (SDG). In fact, SDG n°5 seeks to achieve gender equality, including the elimination of harmful practices, such as FGM, but also early and forced marriage. According to Unicef, the pace of progress over the past 10 years would have to increase by 12 to end it by the expected date.

> The answer from Triangle Génération Humanitaire 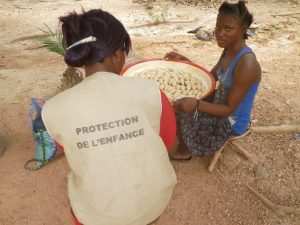 Since 2011 in Bangui, Central African Republic, Triangle Génération Humanitaire has been carrying out actions to protect, educate and reintegrate street children, with specific support for girls who have suffered from many forms of violence.

Child labour is largely due to situations of family extreme poverty, which quite often have their daughters working to ensure money income. Considered a burden by their families, they are the first to be exploited. When it does not completely deprive them of education, child labour exhausts girls who cannot focus on their studies and are often victims of abuse. Deprived of their childhood and exposed to all kinds of risks, their future and empowerment prospects are weak.

All over the world, girls are still too systematically denied education for the simple reason that they were born “girls”. Girls’ education is sometimes not a priority at all for the family, which, if it can afford it, will prefer to send the boys to school and will entrust the girls to do the domestic work. To protect working children, it is necessary to promote respect for the right to education through awareness campaigns, ensuring quality public education and strengthening social protection. In particular, these measures should target girls who very often migrate alone to cities to escape poverty in rural areas and have no alternative but to become domestic workers or even prostitutes.

> The answer from Futur Au Présent 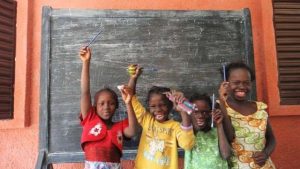 In the Ziguinchor region of Senegal, Futur Au Présent has created the House of Education to welcome and support 90 girls from the poorest families each year to get them out of child labour and enable their empowerment.

Obstacle 3 : insecurity and violence at school and on the way

According to a 2018 Unicef report, half of all 13- to 15-year-old students (150 million children) worldwide have experienced peer-to-peer violence and one in three school children has been bullied or involved in fighting. This is especially true for girls, who are the target of physical abuse, touching and assault at school and on the way. These data do not take into account voluntary attacks on schools during conflict or emergency situations, which increase the vulnerability of girls and reinforce the discrimination they face. In Afghanistan, for example, the number of attacks in schools tripled between 2017 and 2018 (192 attacks in 2018 according to Unicef). This situation obviously has disastrous consequences for the schooling of children and especially girls.

At school, girls are frequently exposed to the physical and/or psychological violence of their classmates or teachers. Gender stereotypes, lack of regulation, but also lack of means and infrastructure, particularly safe and separate toilets for girls and boys, only reinforce this phenomenon.

School safety issues were widely discussed during the G7 work in France, and in particular at the “Innovating to empower girls and women through education” conference on July 5th 2019 at UNESCO in Paris. Afaq Mahmoud, artist and human rights activist from Sudan, opened the conference by highlighting the interdependence between access to education and security, affirming that education cannot be provided without security on the paths and in the places of teaching; but that peace and security cannot be achieved if young girls are not trained and supported towards autonomy. At the end of the G7, the Advisory Council (composed of activists, Nobel Prize winners, journalists, and field actors) also issued a specific recommendation on the safety of children in school: it calls for governments to guarantee “12 years of free, quality and compulsory schooling for all children in safe and secure learning environments”.

> The answer from Afghanistan Libre 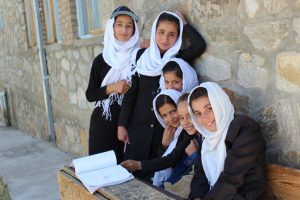 In Afghanistan, the fall of the Taliban has led to a significant increase in the number of children in school, but schools are sorely under-resourced. To promote girls’ education, Afghanistan Libre has established tutoring for more than 900 students and provides training for teachers.

In many countries around the world, menstruations are far from being considered a natural phenomenon. A synonym of shame, discrimination and stigma, menstruations are a taboo that has serious consequences for girls’ lives, especially their schooling. For example, 1 in 10 girls does not go to school when they are menstruating, either because they do not have access to bathroom or a safe place to change, or because they are considered to be “impure” and being forced to stay at home. Menstrual precariousness and the taboo of menstruation affect women and girls all over the world, including in France, where 44% of women experience shame during their menstruation.

In 2016, only half of the world’s schools were equipped with washbasins and soap; in other words, about 335 million girls attended schools and colleges without these basic facilities to manage menstrual hygiene. Water and sanitation infrastructure in schools, and in particular separate toilets, is essential to prevent girls from being absent when they are menstruating. Reducing menstrual poverty is also an important health issue: for various reasons (price of towels or tampons, lack of water or soap) girls are often forced to find alternatives and resort to “System D” or old methods (pieces of fabric, cotton, dry leaves) that can lead to infections.

To ensure that girls no longer miss school because of their menstruations, it is essential and urgent to break the silence and taboos around periods by raising awareness of sexual and reproductive health, and to ensure that everyone has access to safe sanitary facilities and adequate menstrual hygiene.

Sources used to write this article: