Since the late 1980s, the suburbs of Dakar in Senegal have suffered recurrent floods causing considerable damage, including the proliferation of a plant, typha, which poses real problems in terms of urban development. The Senegalese Federation of Inhabitants (FSH), a federation of savings groups composed mainly of women (98%), has been working since 2014 to improve the urban development of these precarious neighborhoods.

The project led by SEED aims to build the skills and capacity of FSH women to be fully autonomous in the supervision and execution of sustainable construction sites in typha, which is a very resistant plant and a natural thermal and phonic insulation. Thus, 600 women will be trained and supported in the development and management of this economic activity. The project will thus promote women’s economic empowerment while contributing to the sustainable reconstruction of precarious neighborhoods. 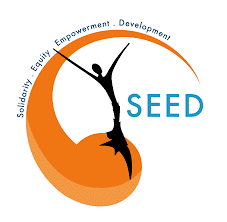 The SEED NGO is a French law association of 1901 created in March 2015 with the mandate to improve the living conditions of vulnerable populations in France and internationally. The aim of the association is to support locally recognized and integrated structures (public, associative or university) through partnerships, to support the development of sustainable and sustainable projects for local communities.