For 8 years, Syria has been marked by war (more than 400,000 dead, 13 million displaced and refugees, 8 million people waiting for emergency humanitarian aid) and the economic situation is disastrous: in Aleppo, the unemployment rate is 80%.

The return to work being a major problem, the association Baroudeurs de l’Espoir supports since 2017 the local association Les Maristes Bleus in the implementation of a micro-projects programme aimed at supporting the Aleppo’s population in the creation of their own activity. As part of this project, a group of 5 women launched the «Heartmade» project: a workshop to make clothes and crafts made by women seamstresses, from recycled fabrics. The project addresses an economic, social and also psychological problem: it offers a job opportunity to 11 women who also benefit from training to improve skills and psychological support by specialized coaches. It thus contributes to their financial independence, and to the strengthening of their self-confidence and the social bond that has expanded with conflicts. 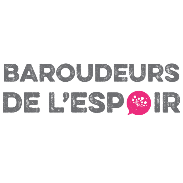 The purpose of the Baroudeurs de l’Espoir Association is to assist victims of armed conflict and other situations of violence, to participate in the reconstruction of countries at war, provide humanitarian assistance in emergency or critical situations.